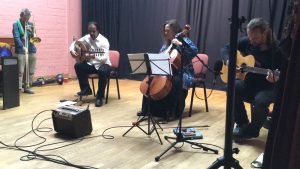 The Borderless project sprang from a belief – shared with many other improvising musicians – that music is not, as is so often stated, a universal language, but that through improvisation and listening we can learn to communicate and create new music that combines the forms and languages of different cultures. We wished to explore together the musical strengths that we could utilise to develop something none of us could do alone, and in the process create something new, that contained elements of all our different musical and cultural backgrounds. Due to logistics and everyone’s different schedules, we had very little preparation time, so the two public concerts were our testing ground. We were reasonably confident that we could create something meaningful and satisfying to listeners, as we are all improvisers.

So myself, along with Sonia Hammond and Charlie Beresford, were delighted to welcome master oud player Ahmed Mukhtar to the Marches, to explore what we could do together. Improvisation is an integral part of classical Arabic music – as it was originally in European music. It is not free though, in the sense that it occurs in a melodic and rhythmic context, so we were interested to see how far we could diverge from that – if at all.

The two concerts, one at Leominster Community Centre (slightly marred by the piano being out of tune and being forced to play an unpleasant Casio keyboard..) and one at Gwernyfed Drama Studio (who have an excellent piano) were well received. Some of the audience were familiar with or had at least heard Arabic music before, but for the majority it was a new sound experience and they enjoyed it.

As did the performers. We focused on a few Arabic scales introduced by Ahmed and also did our own versions of four traditional tunes : Fog el-Nakhal, Bint al-Shalabya, Baghdadi cafe, and Maly shagal souk. These were interspersed with sections of totally free improvisation, and some of the boundaries – between free and structured, melodic and non, were blurred. There is much more to explore, it felt that we were just at the beginning of something..sometimes we seemed to be in a jazz vein, other times close to the Arabic tunes – which are spacious and beautiful – sometimes we were totally free.

We did two workshops, one short one before the Leominster concert, where Ahmed explained some basics of Arabic music’s structure and tonality, and then an all day workshop at Llyswen Primary School. With the schoolchildren we also explored both free improvisation and learning about basic rhythms and modes. The younger children took it all in their stride, although some older ones who came for the morning were more diffident.

For a review of the Leominster concert see http://www.thejazzmann.com/reviews/review/borderless-leominster-community-centre-leominster-herefordshire-09-10-2018/ 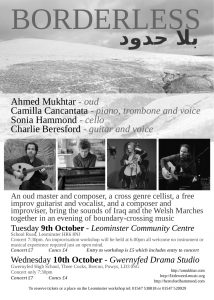