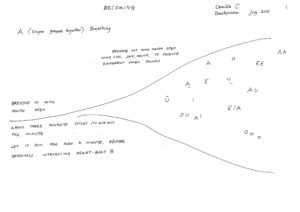 In summer 2015 I was one of two UK composers selected for the DAR residency in Druskinskai, Lithuania. We were commissioned to write piece on the theme of ‘identity’ for the Vilnius choir, Chor Brevis. This was the result. The score was an attempt to indicate the kind of sounds I wanted improvised, as well as some fixed notes. The conductor was asked to play a more active role than usual, moving around, and not always obeyed by the singers.

The following was written for the programme notes:

For me, identity is not a fixed thing; it changes throughout each individual life according to experience and environment. It is also collective. We live in a time when there is a growing sense of global identity. At the same time we still do not live in a world where everyone can express their true identity, whether personal, communal, national, or spiritual, without fear.

Some individuals identify strongly with a state or country or religion, some with a family or tribe, some feel their community is the world. Identity may also be intertwined with perceived class or social status.

Over the past few years I have been involved in creating music for and with people with dementia, and have been pondering on the relationship between memory, identity and consciousness/mind. The brain’s neural connections that make up mind or memory are strengthened as mental or physical actions are repeated over time. They can be lost as well, but there are always some memories intact that can remind an individual of their identity.

We are all inhabitants of the same planet which we share with a myriad other forms of life. Our being-ness on the earth is collective and evolving and one day maybe we will find that sufficient, and no longer fight for domination of each other or make war with the rest of life on earth.

A recording of the final concert in Vilnius with all the composers’ works can be heard here:
https://soundcloud.com/druskininkairtistesidence